Member Dick Ellingson sent this fascinating message about his tenure at suburban 1510 KURB Mountlake Terrace which we thought deserved it’s own posting:

I just noticed the info about KURB Mountlake Terrace. I went to work there in 1969. KURB was owned by a board of twelve local businessmen. There was insurance agent Pat McMahon, a business acquaintance of my dad, which was how I got a job there right after I got my 1st Phone. Levy Johnston and Frank Woody were law partners. Levy was a good guy who actually listened in his office and would call up and bat the breeze once in a while. Two owners were the guys who owned Northwest Garbage Co., next door just down the hill from the station on 52nd Ave. West. One of our taglines was “KURB, overlooking beautiful Northwest Garbage”. It was also known by some as KRUD. And who could forget “KURB, just one step out of the gutter.”

Another owner was Elliott Boisen, an Edmonds M. D. who had a beautiful home and threw a lavish Christmas party for us. A nice man.

Everybody had a title. Everybody was a d.j. I was program director which was as meaningless a title as anybody’s. Norm Nelson – news director – didn’t bathe or use deodorant. Pity his relief. George Ure – news director – became George Garrett at KMPS. Bob (Robert L.) Burr – boy engineer whose grandma brought him to work every day. Jim Dillon (Dillion), Ray Kicker, Steve Norby (in my class at Ron Bailie School of Broadcast), others whose names escape me. Jim Cook did sports.

Ted Hikel was hired as manager. He decided the way to succeed was by imitating 24 hour 50kw KOMO, which was near the top of all the ratings in town. Later, he decided to run for Lynnwood City Council, and he just quit coming to work. If one of the owners phoned for him, we’d say, “Who? That name kind of rings a bell for some reason. Not sure why.”

There were one or two differences between KOMO and us. KURB was a 250 watt daytimer at 1510 with a tight directional pattern, protecting 50kw KGA Spokane. We were licensed to operate from official sunrise to official sundown. “Official” was defined as actual sunup/sundown to the nearest quarter hour on the fifteenth of each month. For instance, if the sun rose at 6:37 we signed on at 6:30; if sunrise was 6:38 we signed on at 6:45. Sign off time was figured by the same formula.

About an hour before our official sundown signoff, KGA usually obliterated our signal once you were a mile away from the towers.

We played the worst music by people nobody ever heard of, all chosen by Ted Hikel. The record distributors ridiculed us, laughed at us or just ignored our existence. When they did send something, it was the stuff no other station would touch.

At first, a few local businesses bought a few ads (I remember a burger place called D’s Drive-In), but they soon figured out nobody was listening. They never listened so why would their customers? I would be at the station all day long without the phone ringing even once. Have a contest – no calls. Once I said, “First person to call me, I’ll drop by your house on my way home and give you a twenty dollar bill.” No calls. Once, just to see what would happen, I played nineteen PSAs in a row. It would have been more, but Pat McMahon phoned and asked me if I would mind not playing so many all at once.

I was a big record collector for years and had been sneaking some in and playing them on the air – actually popular records! What an idea! Hikel got very upset.

Our AP teletype was in a closet just big enough to hold it and some boxes of paper. It must have been way over a hundred in there. You’d open the door and reach in to rip the wire and these giant spiders that were lurking over the door would land on your head. They also lived in all the fluorescent fixtures in the building and just ran back and forth all day.

Eventually, Hikel got fired for not showing up and we had no manager, just two announcers plus a weekender and a receptionist. Somebody brought our paychecks and they never bounced. I called the FCC and asked how many hours of operation were required to keep the license. Seems like it was around six hours a day so for a while we took turns coming to work.

Then the owners got serious about finding a station manager. Doug Setterberg, Stan Boreson’s long time partner, came on board as manager. At that time, Seattle was between oldies stations. Doug made us into an oldies station and called it The Golden Sound.

We invited our listeners to send us a list of their favorites and we’d try to play them. I wrote to Art Laboe of Original Sound Records and he sent us all of his Oldies but Goodies albums. Claude Hall gave us a column on the format change in Billboard. Doug knew the people who owned Almvig’s Appliance in Laurelhurst. They also had sold records and had a warehouse filled with 45s, all catalogued. Doug worked a tradeout with them. I spent all day in that unheated warehouse – almost froze to death – but I left with six or seven hundred virgin 45’s still in their sleeves, and a bunch of 78s, also never played.

Two listeners who were long-time collectors brought all their records to the station. We had boxes of 45s and LPs piled in the control room.

I was doing mornings and when I’d get there, about fifteen minutes before sign-on, all three phone lines would be ringing and they rang all day long. We put in a request line, 774-1510. The Everett Herald did a feature on the station and they printed our Top 40 in the paper every week and gave us a few hundred sheets to put in the stores. 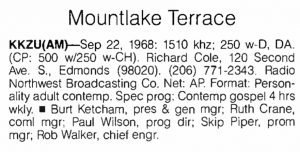 We couldn’t reach Federal Way, but we had listeners up in B.C.

We broadcast all the high school games. Friday night games were called with a Sony cassette recorder and played back Saturday morning. I think everybody in radio had that same model Sony. Maybe it was the only one they made.

We did remotes. Not like today, where a couple of teenage girls hand out bumper stickers and the station van parks out front and that’s a remote.

The first Arby’s in the area opened in Lynnwood on 196th S.W. I did a two hour remote sitting in a booth with a mike, two turntables, a cart machine and a speaker and doing the whole show, putting customers on the air and all that fun.

We did a remote at Lake Forest Park Center, five straight days from signon to signoff.

We even went over to the Tri-Cities to broadcast the Atomic Cup, the same day Neil Armstrong walked on the moon. I don’t know if we actually got on the air, and I never asked. I know there was lots of free beer. Miss Budweiser came in sixth. Pay’n Pak won the race. Remember their old jingle? “Pay’n Pak! Save jack! You’ll find us next to the railroad track!”

There was a guy named Dan Coulter who came by the station once in a while. He lived in Mountlake Terrace and worked at KFKF in Bellevue. We got to know each other and he helped me get a job at KFKF, which is where I went from KURB. Dan became mayor of Mountlake Terrace.

RADIO SILENCE – Stations That Are Off The Air

KKNW Dancing Right Back On Air

REPOST: At KTOY, We Played The Hits & Carried A Big Stick

Number One With A Bullet: The Beatles

Before There Was Victor Stredicke