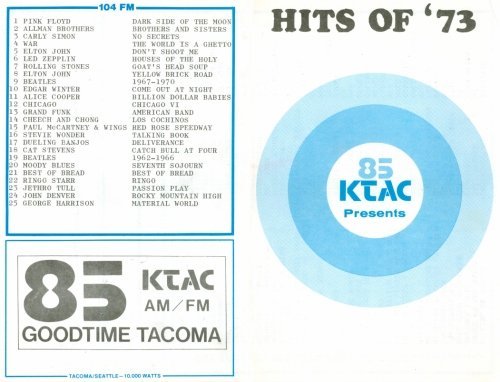 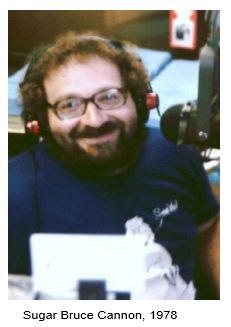 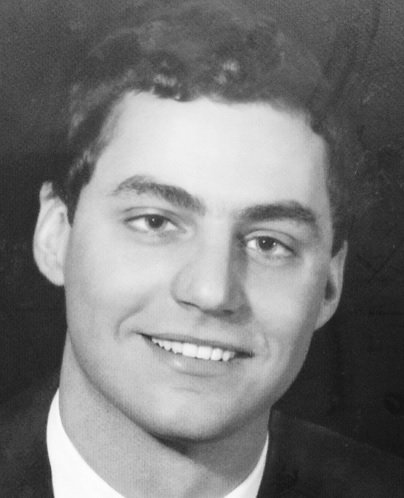 Bill Ogden/Marc Taylor began in broadcasting in 1966, He retired in 2011. “While radio has been a passion,” Ogden said, “I found I had the need for other employment to pay the bills and to keep my sanity. So while I was playing radio in Centralia, McMinnville, Bellingham, Auburn, Tacoma, Olympia, and Seattle, I variously owned some grocery stores, was a college administrator and taught public school (for 18 years).. After his start in McMinnville, Ogden got the newsjob at KPUG 1170, Bellingham. “I got a paycheck! I replaced Steve West! I got my picture on the wall! I even got my picture on the KPUG 1170 Top-40 Hit List.” Under the name Marc Taylor, Ogden worked at KTAC, Tacoma, and then behind the newsdesks at KJUN, Puyallup, KASY, Auburn, KXXO-FM, Olympia, KRPM-FM, Tacoma, and KTAC again, During Metro Traffic stints, he usually was heard on KOMO-AM and KING TV weekend newscasts. In 2012 Ogden was commercial accounts manager at a local car dealership. (VICTOR STREDICKE)
Basement Tapes 1 – Airchecks from KJUN, KTAC, and KOMO
Basement Tapes 2 – Airchecks from KING 5, KVI, KPLZ and KTAC
Basement Tapes 3 – Aircheck from KXXO Olympia
Basement Tapes 4 – KING 5 Traffic, Bob Robertson, KTAC Morning Show 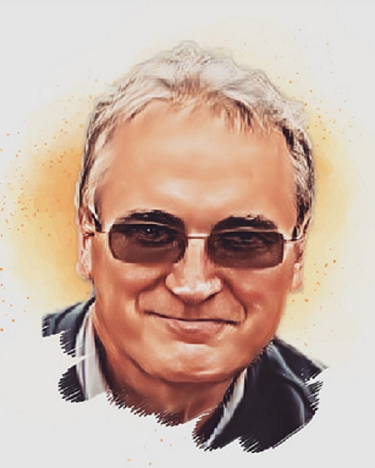 Lou Robbins (Jason Remington) joined the staff at KBRD FM in 1987. The Beautiful Music station was just down the hall from Tacoma’s KTAC 850. When Bobby Simon left KTAC, Lou Robbins was chosen to take over the morning show at the Soft Rock station. When Entercom management chose to scrap the Beautiful Music FM, switching format to Alternative Rock in 1991, Lou Robbins was asked to stay on, as KTAC began simulcasting the new KMTT “Mountain” sound. Under his real name Jason Remington, he continued a few courses at Pierce College and made the nightly trek to Metropolitan Park West, for an all-niter at the new home of KMTT. All while working full-time daily at AT&T. In 1993, he moved to Phoenix, where he picked up a weekend & fill-in gig at KOOL FM, the heritage Oldies station. The format was based on the personal record collection of programmer Jerry Osborne. Some programs were voice-tracked and syndicated nation-wide, to other stations copying the “KOOL” format and moniker.
It was in Phoenix that Jason Remington began blogging. The site was Phoenix Radio Dial (a history of Phoenix Radio). Upon returning to Washington 15 years later, Remington developed SeaTac Media, a site that became qzvx.com and now QZVX.COM— Yes, the one you are looking at right now. Jason Remington is retired and resides in Olympia, WA. (VICTOR STREDICKE)

Lou Robbins and Bill Ogden KTAC It must have been Pet Report day, there is a dog barking outside the KTAC studio (3:15)

Sam Lawson’s Audio Vault: KTAC, Tacoma – Cory Landon (Sam Lawson), 1977
Runtime: 3:47
Cory Landon was my alter ego at KTAC. As I recall it was Harold Greenberg, the station manager, who came up with the name Cory, and PD Ric Hansen had no objection to me tweaking my last name as well, so Cory Landon was born. From what I can tell he drank a lot of coffee.

Gary was a weekender at KTAC with a style of his own, however he was a drinker and one weekend had a little too much while on the air, which lead to him being fired by then Program Director – Ric Hansen. (August 1980-Tim Shook collection)

KTAC 850 TACOMA
KTBI went on the air in 1941 at 1490 on the AM dial with 250 watts which was the maximum power for what were know as Class 4 radio stations. KTBI was established by a group of local businessmen under the corporate name Tacoma Broadcasters Inc., in 1941. H. J. Quilliam, president of Muzak in, Seattle, bought the station in 1945 and moved in as president in the spring of 1946, KTBI was granted permission to move from 1490, 250 watts to 810, 1000 watts daytime. The studio was moved from the second floor of the Puget Sound Bank Building in Tacoma to a beautiful new, studio/transmitter located at 2715 Center Street, literally in the center of Tacoma. In the early 50’s, KTBI received permission to move from 810 to 850 and go full time. On 850, the station call letters changed to KTAC.
KTAC-AM-FM Tacoma, Wash.: 1966-Sold by Jerry P. Geehan, Richard R. Hodge and other stockholders to RADIO 850 CORPORATION- M. Lamont Bean, Dan L. Starr and Ronald A. Murphy for $191,381. Mr. Bean is a partner in a Seattle investment firm; Mr. Starr has printing interests there. Mr. Murphy, a Seattle lawyer, has broadcasting holdings including KELA Centralia and KUEN Wenatchee, both Washington, and KFQD Anchorage. MOR format changed to Top 40 in the late 60s and KTAC competed with KJR & KING for at least the South Sound listenership; KTAC/KMTT later purchased by Entertainment Communications of Philadelphia [1973]. ENTERCOM 850 was briefly a simulcast of KMTT-FM 06/19/1992 and sported the KMTT-AM calls during this period. Entercom sold the station to Southwave Wireless, LLC (Steve West and Dan Walker) in 1996. On March 11, 1996, the station changed its call sign to the current KHHO. It launched a news/talk format (K-H-2-O, The Voice of the South Sound) featuring Manda Factor, Jeff Walker and Bruce Cannon. 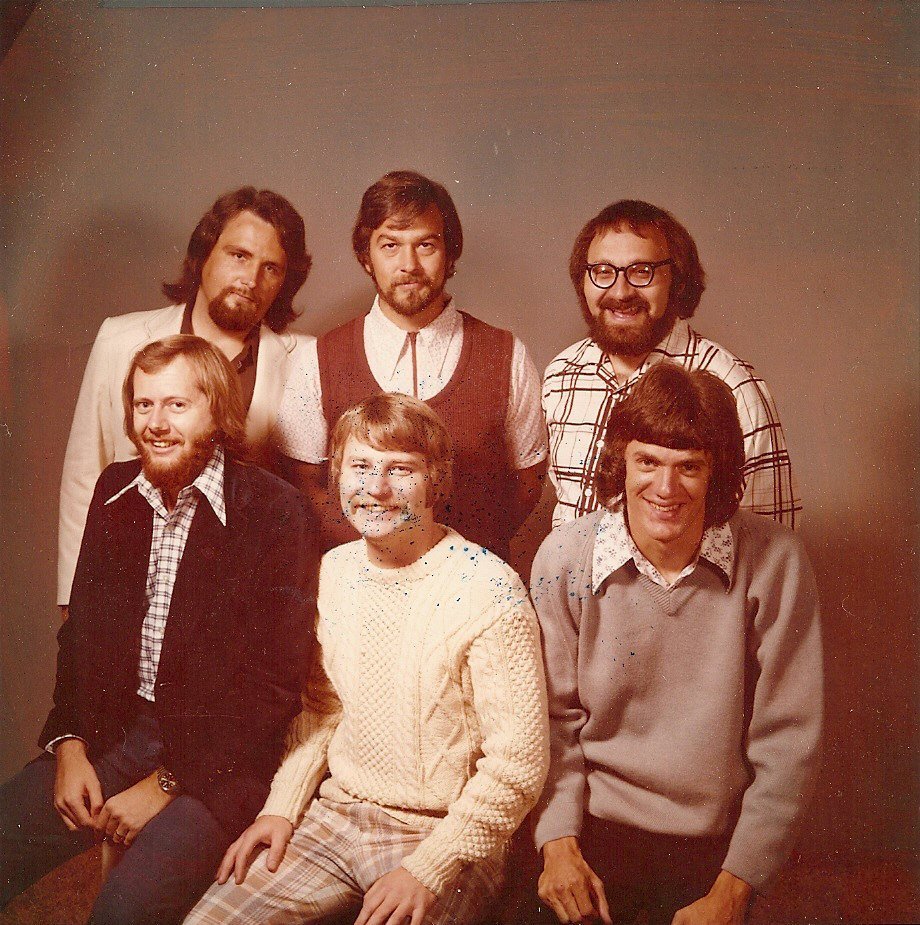