Without consulting their list, based on my fuzzy memory and best guess, I have attempted to provide the meaning/reference of station call letters in our area. If you have knowledge of some of these call letter origins, leave a comment here – or contact me and this list will be up-dated.

OFF THE AIR
These broadcast stations signed off for the last time, years ago.

660 KFOA Seattle – May 23, 1922 this station signed on as KDZE. At the time, the station was testing equipment, for an hour or so each day they would play a few phonograph records. Certified listener reports from as far as Philadelphia were registered. The station was owned by Rhodes Department Store. The station changed call letter to KFOA in March 1924 and then to KOL when Archie Taft bought the station in 1928.


The 1400 frequency is now used by KITZ/Port Orchard as a business/talk affiliate of KGTK 920 AM Olympia, KBNP 1410 AM Portland, and KSBN 1230 AM Spokane. The signal is not heard in the Tacoma area. KITZ personalities: Al Munroe and Fred Miles, Marina Rockinger, Brad Lee, Jeff French, Jerry Van Dyke, Lysa Dufourc

1540 KBVU Bellevue – KBVU existed from 1964-69 before being purchased by Kemper Freeman who wanted to move KFKF off of 1330 where it was stuck with a sunrise-sunset schedule. KBVU broadcast full-time with 1000 watts and I remember it as a jazz station for some of it’s life in the mid-60′s. In 1969, KBVU signed off and KFKF 1540 signed on. [Mike Cherry] 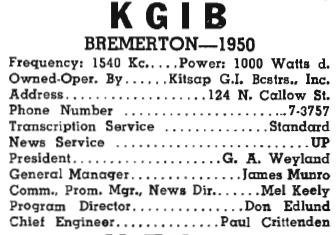 93.3 KOTO Seattle – original 1962 application by owners of KNBX 1050 Kirkland asked for call sign ‘KOTO’. Eastside Broadcasting also owned KARI 550 Blaine and had an application for 104.3 Bellingham with the KBLE calls issued! 104.3 ended up being KERI and 93.3 KBLE-FM. [Mike Cherry]

102.5 KPRN Seattle – before David Segal successfully launched KTW-FM in 1965, a previous CP was issued to another company in 1963, but never built. Plains Radio Broadcasting had a CP for 19 kW and 1090 ft antenna with KPRN call sign issued. [Mike Cherry]