STEVEN SMITH writes:
I met Greg in 1973 when he was a new hire at KVI and I was new at the KIXI newsroom. We met in the elevator at the Towers Bldg, KIXI studio on 9th floor. A young guy introduced himself in the elevator, seeing that I was going to the upper KIXI floor. He said I had a deep KIXI voice and he was Greg Aust….new at KVI and he was in the elevator because he lived in that same building.
I started listening to his mid-day show and loved it. Later, when I was with SRO, I spoke with the former KVI GM, Jack Bankson. Jack said Aust was unpredictable, one day he announced he was doing his show naked and a quick peak proved that to be true. One year he got a great book and demanded a raise. Greg got the raise but, next time his numbers were down and he came in the manager’s office and resigned.

I do not know of any Aust KVI airchecks, but his voice is available as Austin in Boston and Chuck McKay at CKLW. A search online will turn those up. The McKay tape is infamous as weird, so if you have not heard it, then check it out.


STEVEN SMITH: Other broadcasters I knew, on air at KIXI at that time, included Bob Liddle, Ken Stuart, Rudy Perez and Steve Schilling. Wally Nelskog, the owner of KIXI, came by often as well. 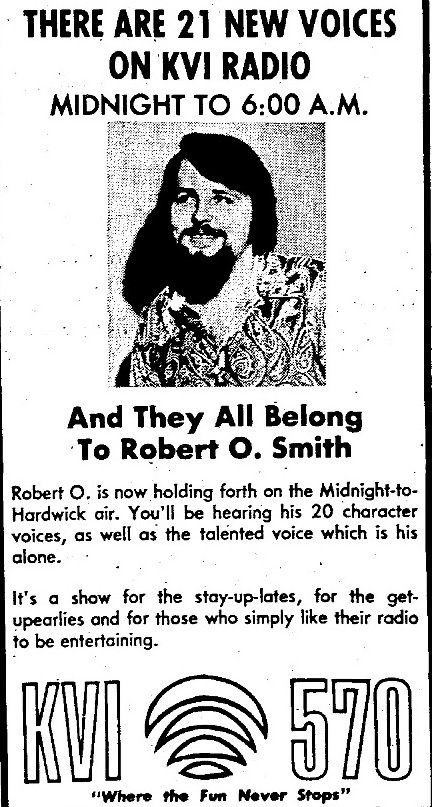