Update: Mark Mester has been fired from KTLA…

As of 9/22/22 his bio has been removed from the KTLA website…
September 19, 2022 8:40 pm
DEADLINE reported:
The tumult continued today at L.A.’s Nexstar-owned KTLA-TV as the outlet’s Weekend Morning News anchor Mark Mester was suspended, Deadline has confirmed.

Mester’s suspension comes less than a week after it was abruptly announced that his co-anchor, Lynette Romero, was leaving the station.

On Wednesday, the station’s longtime entertainment specialist Sam Rubin went on air with what he termed “some news that we’ve just been handed here that we wanted to share with you first.”

Rubin said in the message that Romero had “decided to move on after nearly 24 years at KTLA.”

He went on to say that management “worked hard” to get her to stay, but she chose to depart.

While none of the parties involved seem to be disputing that Romero wanted to leave — including Romero herself — fans and the station’s faithful took to Twitter to lament her sudden exit. They were not alone in their disappointment.

On Saturday, Romero’s co-anchor Mester went on air and, seemingly of his own accord, offered what he called “an apology” to viewers: “What the viewers experienced was rude, it was cruel, it was inappropriate, and we are so sorry.”

Mester went on to explain that what bothered him was the fact that Romero’s departure was announced so suddenly and that she did not get time to say goodbye to viewers. He called the announcement “unfortunate” and “inappropriate” and again apologized.

“I also want to say sorry to Lynette Romero,” he continued, “because, Lynette, I love you so much. You really are my best friend. You did not deserve what happened to you on Wednesday.”

Apparently, Mester’s commentary did not sit well with station management, because he now has been suspended. There is no indication for how long or how it will impact the station’s Weekend Morning News.

Deadline reached out to KTLA and will add any comment received.

“Several sources at the station said it was common knowledge that staffers were concerned about Mester’s temper and what was described as his ‘disrespectful’ behavior to women and had complained to management.” LAT also quotes one veteran staffer who pained Mester as a loose cannon. “You would not believe the temper tantrums and the weird things that set him off. You’re constantly afraid you’re going to say the wrong thing.”–LAMAG 9/24/22

This is from March 2021, when Saiers left KING for KTLA. These corporate quotes can make you throw up a little in your mouth..
Saiers, most recently news director at KING-TV, in Seattle, succeeds Jason Ball, who held the post for 12½ years and announced plans to leave in February.

“Peter is a content guy, a visionary and a collaborative leader,” said KTLA VP and GM Janene Drafs. “He knows how to connect with audiences and meet them where they are going, in addition to understanding where they’ve been. Best of all, he’s a longtime viewer and fan of KTLA, someone who understands our brand and promises to bring energy and passion as he joins our amazing team. He’s a native Californian with family in the Los Angeles area, and we look forward to him joining the team at KTLA.”

(Scott Jones-FTVLIVE 9/21/22) (KTLA anchor) Mark Mester has gone above the union and has hired a lawyer that sources say was meeting with KTLA management Wednesday. Although the station has made no official announcement, KTLA insiders say that Mester was suspended from the station after he called out station managers on the air and apologized on behalf of the station for how they handled the exit of Anchor Lynette Romero.

After 24 years, and without an on-air farewell. Sam Rubin reads company memo that Lynette has decided to explore a new opportunity. 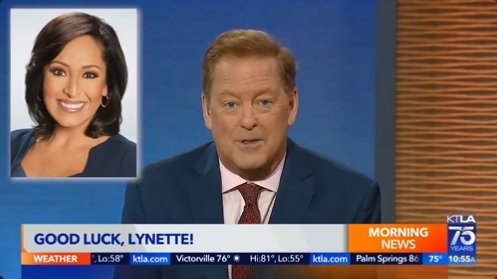 Brandi Kruse Teams Up With Future42.org

She Fancies Herself A Rock Star; Root Sports’ Piper Shaw

25th Anniversary For The Millman’s